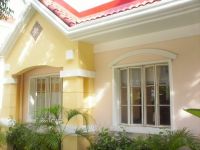 House and Lot for Sale!
The Aldea del Sol subdivision is in the village of Bangkal in Lapu-Lapu City in Mactan island, Cebu. It has two house models–Redwood and Daphne–that are of Spanish-inspired themes.

Filinvest Land Incorporated, which owns the subdivision, considers Aldea del Sol among its middle-income projects and the cost of the houses in the subdivision ranges from 1.5 million (close to $30,000 using May 2006 exchange rates) for the Redwood model to 3 million pesos for the Daphne model. (Contact us for additional information on modes of payments.)

Redwood model
The Redwood house is a single story house with two bedrooms and one bathroom, and the whole roof turned into a deck for additional space. The front door opens into the living room, which is adjacent to the dining room. Near the kitchen is a door that opens to free space that can be used as laundry area at the back of the house and the stairway to the roof deck.
The Redwood model’s master bedroom has an adjoining door to the bathroom. The master bedroom and the second bedroom are lined with windows to ensure that enough light and air get into the rooms.
Total lot area for the Redwood package is 120 square meters while the floor area is 44 square meters.
The amenities and facilities already present in the subdivision as of May 2006 include the entrance gate and guardhouse, concrete roads, cement curbs and gutters, 12-meter access road, power and water system, drainage and sewer facilities, swimming pool, playground, cabana, basketball court, and children’s playgound.
The subdivision is a 10-minute ride by trisikad (a bicycle with a sidecar) from the Bangkal main road.
About Bangkal
Bangkal is one of the villages in Lapu-Lapu City in Mactan island. It is in the interior part of Lapu-Lapu and is close to world-class white sand beaches. It is 30 minutes away from the Mactan-Cebu International Airport and 20 minutes away from the Marina Mall where several restaurants, grocery store, banks, and pharmaceuticals are located. It is 30 minutes away from the Gaisano Mactan mall and City Hall.
Bangkal is 15 minutes away from the Mactan Doctors’ Hospital and 20 minutes away from the Mactan Export Processing Zone 2 area in Basak where there are also restaurants, a cafe, parlors, spas, and a dentist’s clinic. It is 30 minutes away from the city public market and the church and 45-minute to one hour drive from SM City mall in Cebu City.
Public transport
There are three modes of public transport within the city: jeepneys and motorcycles for long distances and the trisikad (bicycle with a sidecar) for short distances.
Motorcycles are preferred mode of transport to the city market. They go the opposite way of the jeepney that plies the Bangkal-city market route. They can drop off passengers at any point along the Bangkal-city market route. The motorcycles pass by the Mactan Doctors’ Hospital and Mactan Export Processing Zone 2 in Basak on the way to the market.
Jeepneys ply the Bangkal-city market route in the opposite direction of the tricycles. Passengers can disembark on any point along this route. The jeepneys pass by the following points–Buaya mini-market, Mactan Export Processing Zone 1, Marina Mall, City Hall, Gaisano Mactan–enroute to the city market. Along the road opposite the Marina Mall are jeepneys that take passengers to SM City. Passengers may disembark at any point along this route.
Other jeepneys passing by the Bangkal area go directly to Highway Seno in Mandaue City.
Vans-for-hire routinely pass by the Bangkal main road and they travel to and from Bangkal and SM City in Cebu City and the Ayala Mall in Cebu City. (Mode of transport from the Aldea del Sol subdivision to the Bangkal main road is the trisikad.) Van for hire fare is P25 per person.

Information about the ad poster

Other items listed by SOLD Properties